What makes Taylor such an attractive place to call home?

It starts right at the District Hall where the community’s leaders dedicate themselves to ensuring the community provides a positive and affordable alternative for the development of residential housing, commercial ventures and industry.

From Taylor Flats to the District of Taylor

In 1896, Donald Herbert Taylor (Herbie), Taylor’s namesake, moved west from Manitoba and took up a homestead at the Peace River Crossing (Peace River, AB) where he married Charlotte.

Although Charlotte was educated in a mission school in Alberta, and spoke fluent English and French, she preferred her native Cree. Herbie made a living carving paddles and playing his fiddle for dances.

Then in 1905 they moved to Hudson’s Hope where he had taken a job for the Hudson’s Bay Co. It was in 1912 that Herbie, Charlotte and their children moved back down the river and were the first family to settle in the Flats.

Herbie was a ferryman and trapper who maintained a Peace River crossing for fur traders, prospectors and homesteaders heading for the north. For years, he and Bob Barker argued over the name for the Flat.

When Herbie left for his traplines, Bob would put up a sign reading “Barker Flats”, and when Bob left, Herbie would put up his sign “Taylor Flats.“ Finally, in 1923, a post office was opened at Taylor’s farm and the Flat officially became Taylor.

For several years, Herbie operated the Government Ferry and held this post until 1935. The first road over the hills was made by Herbie, to haul hay down for his cattle.

Herbie lived on his farm until about a year before his death in 1956. He was a kind and gentle man, remembered with fondness by his grandchildren. 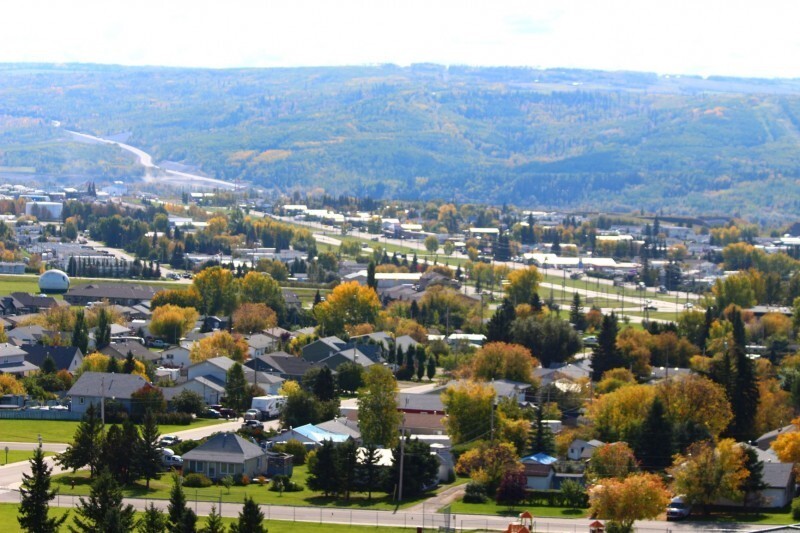 Taylor’s namesake Herbie Taylor is often seen taking a risk crossing the Peace River on ice in the spring. Once the ice begins to break up, the river flows freely within an hour! A favorite annual event is betting on when the ice is going out.

Education is the priority and everyone pitches in to build a 16 x 24 ft log schoolhouse known as the Taylor Flats School. It is the first school north of the Peace River in British Columbia.

The D.A. Thomas 1916-1929 is the first and largest sternwheeler steamboat on the Peace. It carries 160 passengers and offers hot and cold running water and electricity! Pure luxury in these days.

The Church of the Good Shepherd is built by Otto Hoffstrom, his neighbours and friends as a memorial to the Hoffstrom’s four young daughters who drowned when their car rolled off the ferry.

The Alaska Highway is built in just eight months to secure a northern military outpost in case of a Japanese invasion following the attack on Pearl Harbour. At the peak of construction, 11,500 troops, 7,500 civilians and 11,000 pieces of equipment are working on this great engineering achievement.

The Alcan Ferry is built to help transport the American army while the bridge is under construction. The ferry service serves as a vital link connecting the North and South.

The Peace River Suspension Bridge celebrates its grand opening nine months after construction begins. It is the longest bridge on the highway at 2,130 feet.

The first rail trestle bridge is constructed across the Peace River, with the first rail crossing taking place in May of 1958.

The Peace River Suspension bridge collapses spectacularly on October 16. Fortunately, there are no injuries suffered. Watch a film of the event.

Industry first moves into Taylor with the construction of the Westcoast Energy pipeline and the Taylor Refinery. Currently, the site of the NorthRiver Midstream Gas Plant.

The Village of Taylor “officially” comes into being with the granting of Letters Patent by the Provincial Government. Members of the first town Commission are: Bob Wheatley, Chairman; Commissioners Glen Kyllo, Paul Hill, Sam Miller and Tony von Hollen.

Construction of the new Peace River Bridge is completed.

Construction of the W.A.C. Bennett Dam is completed thus controlling the flows on the Peace River.

The first World’s Invitational Gold Panning Championships is held. An annual event that currently provides for a Class “A” World Champion but also involves a variety of classes for the non-professionals, media and celebrities. Other pioneering activities such as bannock baking, claim staking, metal detecting, horseshoes, etc. are still very popular.

The wooden trestle leading to the Peace River Rail Bridge is destroyed in a fire set by vandals.

The Village of Taylor became the District of Taylor through the re-issuance of Letters Patent by the Provincial Government. Members of Council are: Mayor Fred Jarvis; Alderman Darrel Orosz, Bob Velie, Tony von Hollen and Roy Blackwood.

The District places 2nd in the National Communities in Bloom Competition. The Peace River is also designated as a B.C. Heritage River due to the significant part it has played in the development of the Province.

The District’s millennium project, a memorial garden and cenotaph, is completed and dedicated. Inscribed in the cenotaph: With special commemoration to the dedication and sacrifices made by the 341st Engineers of the U.S. Army corps of Engineers stationed at Taylor during the construction of the Alaska-Canada Highway in 1942.

The District opens the doors of its newest multi-purpose facility: a community hall/gymnasium designed as a “build with wood” project in support of the lumber industry in the region.

New expansion area at Peace Island Park opens with electrical hook-ups, a new playground and a parking area for the boat launch. The Rocky Mountain Ranger Forts also open up to the public for the first time.

District of Taylor welcomes the filming of the TV series Village on a Diet.

District of Taylor’s Community Services Hub opens and the municipal Cardio and Rehab Facility is closed.

Pavilion at Peace Island Park becomes available to rent. The District of Taylor wins the Facility Excellence Award issued by the British Columbia Recreation and Parks Association for the construction and development of the Community Services Hub.

From February 20th – 23rd the BC Winter Games (figuring skating) are hosted at the District Ice Centre. The Jarvis Crescent Residential Subdivision is constructed, and individual lots are available for purchase. The subdivision was named after former Mayor Fred Jarvis, who served our community for 35 years. Please click here to view a video of Mayor Jarvis’ Speech after retirement from local government.